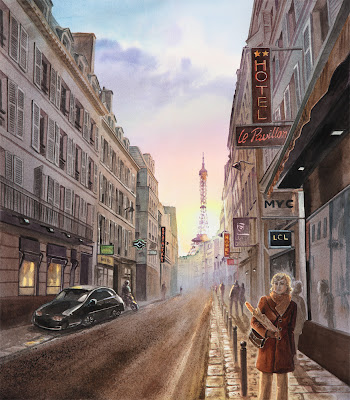 No need to explain my love to Paris and traveling to Europe. OK, to a traveling in general. I love it! First time I've visited Paris in 1995. That time I lived in Saint Petersburg, Russia; and, a week in Paris was beyond my dreams. A travel company I worked for offered a super cheap deal (though for me it still was 4 times of my salary) and I took off. Next time I went their seven years later. My friend and I celebrated my 38th Birthday.. One evening we were heading to our hotel. It just stopped raining and setting Sun hit the loud streets with the last beams of that day. I lifted my head and all of a sudden saw that Eiffel Tower disappeared. Only top of the construction was clearly visible. Thank God I had my camera with me.

In this painting of Paris street I wanted to portray that feeling I had when I saw the Eiffel Tower in the sun light. Maybe it is not traditional view as all posters in the world would want to picture Eiffel Tower in full its glory. Oh well, I saw it floating in the air.

The girl on the front is just a random Paris visitor. She is rushing home and doesn't even know what's happening behind. I gave her my hairstyle and dressed in my coat and a scarf. I also wanted to put some story into my painting of Paris as I think this city (no matter what they might say) is romantic. Here is my story:

"It was nice fresh evening in Paris. Only second day and She was already in love with the City. Heading home that night and dreaming of quiet dinner she heard a loud boom. The motorcycle broke the murmur of Rue Saint Dominique and made Her turn the head toward the noise. He takes his helmet of and looks in her direction. Her face is lit by the evening Sun and with astonishment of the beautiful Eiffel Tower disappearance..."

Okay, back to the Paris paintings. All what you see on it is only artist's imagination, with exception only the Eiffel Tower, Paris, The Sun. Feel my love to that romantic city. I've even created a Gallery that called My Paris Mania where you can find  dozens of impressions from my Eiffel Tower and Paris paintings.

This morning the curiosity led me to find a website with 360 degree photos of Paris streets. I loved placing Full Screen feature and look around as I am there in Paris right now:
http://www.paris-360.com/panoramic-photos/paris.html
Happy Traveling!

And  I also found an interesting article posted by Fox News on Ten Things You'd Never Guess About Paris. It was an opinion of one writer who came to Paris from America and settled down there. Per his point of view, as an example:
- the less French you speak than better you are
- the French people appreciate American culture more than we think
- the French like tourists
- but French people in general sometimes don't like Parisians (read why)
and much much more :0)

In Every Piece Of My Art There Is A Piece Of My Heart And A Sparkle Of My Soul
www.artirina.com 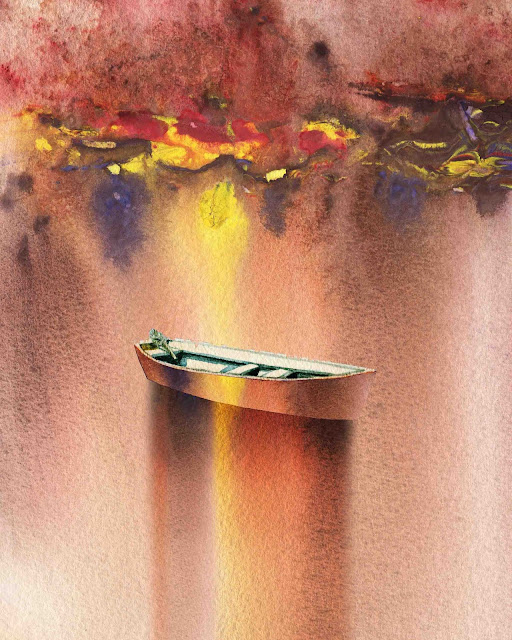